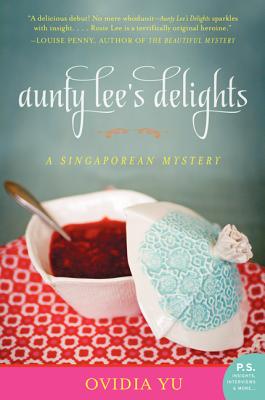 This is book number 1 in the The Aunty Lee Series series.

After losing her husband, Rosie Lee could easily have become one of Singapore’s “tai tai,” an idle rich lady devoted to an aimless life of mah-jongg and luxury shopping. Instead she threw herself into building a culinary empire from her restaurant, Aunty Lee’s Delights, where spicy Singaporean home cooking is graciously served by Rosie Lee herself to locals and tourists alike. But when a body is found in one of Singapore’s beautiful tourist havens, and when one of her wealthy guests fails to show at a dinner party, Aunty Lee knows that the two are likely connected.

The murder and disappearance throws together Aunty Lee’s henpecked stepson Mark, his social-climbing wife Selina, a gay couple whose love is still illegal in Singapore, and an elderly Australian tourist couple whose visit—billed at first as a pleasure cruise—may mask a deeper purpose. Investigating the murder is rookie Police Commissioner Raja, who quickly discovers that the savvy and well-connected Aunty Lee can track down clues even better than local law enforcement.

Wise, witty and unusually charming, Aunty Lee’s Delights is a spicy mystery about love, friendship and home cooking in Singapore, where money flows freely and people of many religions and ethnicities co-exist peacefully, but where tensions lurk just below the surface, sometimes with deadly results.

Ovidia Yu is one of Singapore's best-known and most acclaimed writers. She has had more than thirty plays produced and is also the author of a number of mysteries. She received a Fulbright Fellowship to the University of Iowa's International Writers Program and has been a writing fellow at the National University of Singapore.

“A delicious debut! Aunty Lee’s Delights is no mere whodunnit -- it sparkles with insight into the traditions and moral complexities of modern Singapore. Rosie Lee is a terrifically original heroine.”
— Louise Penny, author of The Beautiful Mystery

“Engaging . . . Fans of Alexander McCall Smith’s No.1 Ladies’ Detective Agency series will find a lot to like.”
— Publishers Weekly