N or M?: A Tommy and Tuppence Mystery (Paperback) 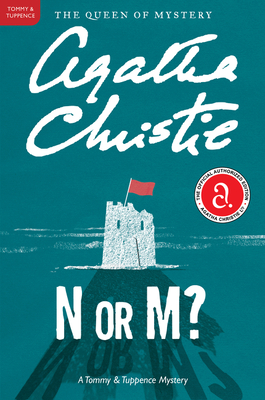 By Agatha Christie
$15.99
Available to Order

In this exclusive authorized edition from the Queen of Mystery, set during the dark days of World War II, Tommy and Tuppence Beresford are put on the trail of a pair of Nazi spies who have murdered Britain’s top agent.

World War II is raging, and while the RAF struggles to keep the Luftwaffe at bay, Britain faces a sinister threat from “the enemy within”—Nazis posing as ordinary citizens.

With pressure mounting, the intelligence service appoints two improbable spies, Tommy and Tuppence Beresford. Their mission: to seek out a man and a woman from among the colorful guests at Sans Souci, a seaside hotel. But this assignment is far from an easy stroll along the promenade—N and M have just murdered Britain’s finest agent and no one can be trusted.

Praise for Agatha Christie: “Agatha Christie proves that if you really are good enough, you can break all the ‘rules’ and still come up with a winner.”
— Anne Perry, New York Times bestselling author of the Thomas Pitt and William Monk series of Victorian mysteries

“As ingenious as ever.”
— The Guardian