A Lesson in Secrets: A Maisie Dobbs Novel (Hardcover) 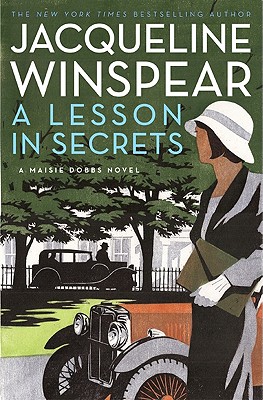 This is book number 8 in the Maisie Dobbs series.

“Put on the kettle, lock all the doors, and settle in for a fabulous read with the newest adventure of the indomitable Maisie Dobbs! It's 1932, and Maisie takes a job with the British Secret Service, going undercover to investigate ties between a small Cambridge college and the rising Nazi Party. When the head of the college turns up dead, Maisie finds herself torn between the Service and Scotland Yard in a complicated case involving echoes of the last war and omens of the next. A Lesson in Secrets confirms Winspear's place at the top of the list of historical mystery writers.”
— Kristine Kaufman, The Snow Goose Bookstore, Stanwood, WA

Private investigator Maisie Dobbs receives her first assignment from the British Secret Service in A Lesson in Secrets, the eighth book in Jacqueline Winspear’s award-winning mystery series. Sent to pose as a junior lecturer at a private college in Cambridge, she will monitor any activities “not in the interests of His Majesty’s government.” When the college’s pacifist founder is murdered, Maisie finds herself in the midst of sinister web of murder, scandal, and conspiracy, activities that point towards members of the ascendant Nationalsozialistische Deutsche Arbeiterpartei—the Nazi Party—on Britain’s shores. An instant classic, and sure to captivate long-time Maisie Dobbs fans as well as readers of Agatha Christie, Elizabeth George, and Alexander McCall Smith, A Lesson in Secrets is “a powerful and complex novel, one that will linger in memory as a testament to her talent and her humanity” (Richmond Times-Dispatch).

“Maisie is one of the great fictional heroines, equal parts haunted and haunting.”
— Parade

“The combination of period detail and intricate storytelling makes A Lesson in Secrets seem distant enough to be romantic but sufficiently modern to engage our sympathies.”
— Tom Nolan, Wall Street Journal

“With an affecting storyline and graceful prose, Winspear has again created a powerful and complex novel, one that will linger in memory as a testament to her talent and her humanity.”
— Richmond Times-Dispatch