The Grass Is Singing: A Novel (Paperback) 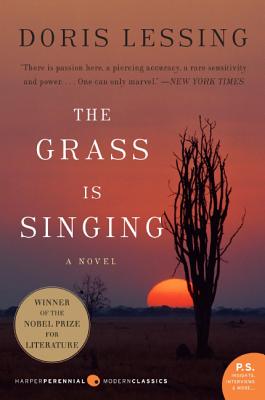 By Doris Lessing
$15.99
Available to Order

"There is passion here, a piercing accuracy, a rare sensitivity and power. . . . One can only marvel." — New York Times

Set in Southern Rhodesia under white rule, Doris Lessing's first novel is at once a riveting chronicle of human disintegration, a beautifully understated social critique, and a brilliant depiction of the quiet horror of one woman's struggle against a ruthless fate.

Mary Turner is a self-confident, independent young woman who becomes the depressed, frustrated wife of an ineffectual, unsuccessful farmer. Little by little the ennui of years on the farm works its slow poison. Mary's despair progresses until the fateful arrival of Moses, an enigmatic black servant. Locked in anguish, Mary and Moses—master and slave—are trapped in a web of mounting attraction and repulsion, until their psychic tension explodes with devastating consequences.

Winner of the 2007 Nobel Prize in Literature, Doris Lessing was one of the most celebrated and distinguished writers of our time, the recipient of a host of international awards. She wrote more than thirty books—among them the novels Martha Quest, The Golden Notebook, and The Fifth Child. She died in 2013.

“There is passion here, a piercing accuracy a rare sensitivity and power. . . . One can only marvel.”
— New York Times

"Emotional unity and force ... one of her best works."
— New York Review of Books

"Her impressive first novel is told with all the intensity and passion Miss Lessing compacts into all her work."
— St. Louis Post-Dispatch

"An extremely mature psychological study. [The Grass Is Singing] is full of touches of truth seldom mentioned but instantly recognized. By any standards, this, book shows remarkable powers and imagination."
— New Statesman