The Burglar on the Prowl (Bernie Rhodenbarr #10) (Mass Market) 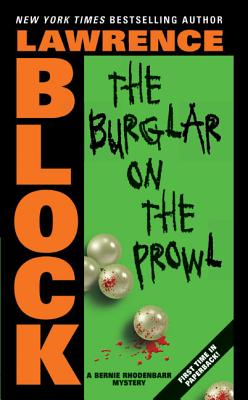 This is book number 10 in the Bernie Rhodenbarr series.

A philosophical yet practical gentleman, Bernie Rhodenbarr possesses many admirable qualities: charm, intelligence, sparkling wit, and unwavering loyalty. Of course, he also has this special talent and a taste for life's finer things. So he's more than willing to perform some vengeful larceny for a friend -- ripping off a smarmy, particularly deserving plastic surgeon -- for fun and a very tidy profit.

But during a practice run at another address, Bernie's forced to hide under a bed when the lady of the house returns unexpectedly with the worst kind of blind date in tow. In no time, Bernie's up to his burgling neck in big trouble. Again. And this time it includes his arrest, no less than four murders, and more outrageous coincidences than any self-preserving felon should ever be required to tie together.

Lawrence Block is one of the most widely recognized names in the mystery genre. He has been named a Grand Master of the Mystery Writers of America and is a four-time winner of the prestigious Edgar and Shamus Awards, as well as a recipient of prizes in France, Germany, and Japan. He received the Diamond Dagger from the British Crime Writers' Association—only the third American to be given this award. He is a prolific author, having written more than fifty books and numerous short stories, and is a devoted New Yorker and an enthusiastic global traveler.