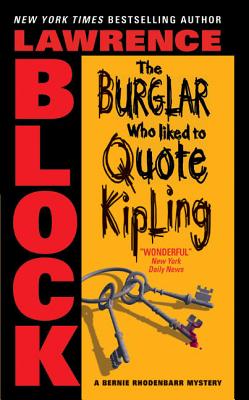 This is book number 3 in the Bernie Rhodenbarr series.

Bernie Rhodenbarr has gone legit -- almost -- as the new owner of a used bookstore in New York's Greenwich Village. Of course, dusty old tomes don't always turn a profit, so to make ends meet, Bernie's forced, on occasion, to indulge in his previous occupation: burglary. Besides which, he likes it.

Now a collector is offering Bernie an opportunity to combine his twin passions by stealing a very rare and very bad book-length poem from a rich man's library.

The heist goes off without a hitch. The delivery of the ill-gotten volume, however, is a different story. Drugged by the client's female go-between, Bernie wakes up in her apartment to find the book gone, the lady dead, a smoking gun in his hand, and the cops at the door. And suddenly he's got to extricate himself from a rather sticky real-life murder mystery and find a killer -- before he's booked for Murder One.

Lawrence Block is one of the most widely recognized names in the mystery genre. He has been named a Grand Master of the Mystery Writers of America and is a four-time winner of the prestigious Edgar and Shamus Awards, as well as a recipient of prizes in France, Germany, and Japan. He received the Diamond Dagger from the British Crime Writers' Association—only the third American to be given this award. He is a prolific author, having written more than fifty books and numerous short stories, and is a devoted New Yorker and an enthusiastic global traveler.