The Great Mortality: An Intimate History of the Black Death, the Most Devastating Plague of All Time (Paperback) 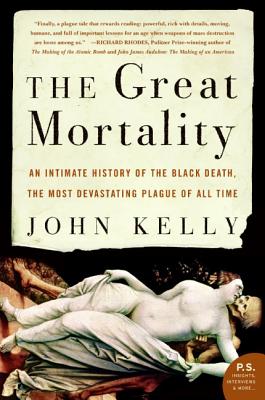 By John Kelly
Not Available from Us

“Powerful, rich with details, moving, humane, and full of important lessons for an age when weapons of mass destruction are loose among us.” — Richard Rhodes, Pulitzer Prize-winning author of The Making of the Atomic Bomb

The Great Plague is one of the most compelling events in human history—even more so now, when the notion of plague has never loomed larger as a contemporary public concern.

The plague that devastated Asia and Europe in the 14th century has been of never-ending interest to both scholarly and general readers. Many books on the plague rely on statistics to tell the story: how many people died; how farm output and trade declined. But statistics can’t convey what it was like to sit in Siena or Avignon and hear that a thousand people a day are dying two towns away. Or to have to chose between your own life and your duty to a mortally ill child or spouse. Or to live in a society where the bonds of blood and sentiment and law have lost all meaning, where anyone can murder or rape or plunder anyone else without fear of consequence.

In The Great Mortality, author John Kelly lends an air of immediacy and intimacy to his telling of the journey of the plague as it traveled from the steppes of Russia, across Europe, and into England, killing 75 million people—one third of the known population—before it vanished.

John Kelly, who holds a graduate degree in European history, is the author and coauthor of ten books on science, medicine, and human behavior, including Three on the Edge, which Publishers Weekly called the work of "an expert storyteller." He lives in New York City.

“Splendidly written. Kelly has written a popular history based on the best scholarship available, and written it very well indeed.” — Detroit Free Press (4 out of 4 stars)

“A fascinating account of the plague that swept Europe and Asia in the 14th century, killing about half the population. It’s a frightening reminder of what could happen today.” — Nelson DeMille, The Birmingham News

“Stunning. . . . Kelly combines distinguished scholarship in the science, medicine and European history [and] meets some of the world’s darkest days as if he were a forensic sleuth who must first re-create the ambience of the victims’ world before tracking down their deaths. He endows The Great Mortality with the sheer immediacy ancient history yields to only a few.” — Houston Chronicle

“John Kelly combines the skills of a medical writer with those of a historian . . . [he] offers an insightful and rather frightening exploration of medieval medicine. Exhaustively researched and relying largely on accounts of those who lived through the Black Death, Kelly’s narrative offers us an intimate exploration of a world falling apart.” — San Francisco Chronicle

“Timely and welcome . . . conveys in excruciating but necessary detail a powerful sense of just how terribly Europe suffered, and just how resilient it was in the face of what seemed to many certain extinction.” — Jonathan Yardley, Washington Post Book World

“It’s almost unethical to write a book on human cataclysm as entertaining as The Great Mortality. Strange that a book about the worst natural disaster in European history should be so full of life. This book may be written in the tradition of Barbara Tuchman but there is a seething vitality here that is Kelly’s alone.” — Minneapolis Star Tribune

“The Black Death is history’s best-known pandemic, but until now its full history has not been written. In The Great Mortality John Kelly gives a human face to the 14th century disaster that claimed 75 million lives, a third of the world’s population.” — Oakland Tribune

“A ground-level illustration of how the plague ravaged Europe…putting a vivid, human face on an unimaginable nightmare.” — Kirkus Reviews

“There has never been a better researched, better written, or more engaging account of the epidemic the world has ever known. Superb and fascinating.” — Simon Winchester, author of The Professor and the Madman and Krakatoa

“Powerful, rich with details, moving, humane, and full of important lessons for an age when weapons of mass destruction are loose among us.” — Richard Rhodes, Pulitzer Prize-winning author of The Making of the Atomic Bomb

“A rich and evocative narrative history of the late Middle Ages, written in the tradition of Barbara Tuchman, which brings alive the time of the Black Death. I couldn’t stop reading Kelly’s story. It’s a work of brilliance and wisdom.” — Richard Preston, author of The Hot Zone

“John Kelly approaches the story of the greatest tragedy in history like a forensic detective who must first recreate the life of the victims before examining their deaths. He probes through the debris of their virtues and sins as well as the mere foibles of daily life to reveal the rich and colorful world that was suddenly ripped apart and nearly destroyed by climate change, famine, and, ultimately, the horrors of the worst plague in world history. . . . Kelly’s book might also be a warning about our own future.” — Jack Weatherford, professor of anthropology at Macalester College and author of Genghis Khan